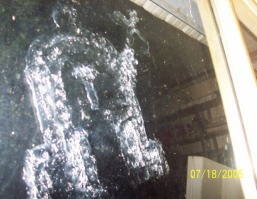 Some of these images are included in Chosen and are provided here in full color. These images were not created by a human hand.

They are not artwork. They are actual photos taken over a period of months in 2005. They have not been altered and the images have not been graphically produced.

All attempts to recreate the images photographed have been unsuccessful. Professional photographers and supernatural experts and enthusiasts that they have been shown to have no explanations as to what could have caused them.

The images supernaturally appeared on a regular sliding plate glass door. Each image depicts a visual message that the Cherubic Order of Holy Angels wishes to relay to mankind in these End Times.

The response I have received in regards to these photos has been for the most part, disbelief. Some have even gone as far to say, “I’m afraid of anyone that gets messages from fogged up sliding glass doors”. Others immediately assume that the images were created by human hand using any number of household products, including petroleum jelly (this seems to be the most commonly assumed product). Above all though, is the question of WHY the visions would be delivered this way. In this portion of the article I will explain why using the Holy Scriptures as guidance.

The way that we perceive visions can be in dreams or on any object that reflects the cast of the vision. For those that have the dreams, or see the visions either with the gift of second sight or with their own two physical eyes, one must have faith in order to believe. But those who discount what comes from Father simply lack faith and the ability to understand what their own minds or hearts will not tolerate.

Numbers 12:6 "He said: "Listen to what I say: If there is a prophet among you from the LORD, I make Myself known to him in a vision; I speak with him in a dream."

Ponder the following: Psalm 89:19 "You once spoke in a vision to Your loyal ones and said: "I have granted help to a warrior; I have exalted one chosen from the people."

The window vision messages that the Light of Life Ministry have been given, are sealed off from those not worthy of understanding.

Isaiah 29:11 “For you the entire vision will be like the words of a sealed document. If it is given to one who can read and he is asked to read it, he will say, “I can’t read it, because it is sealed.”

Trust is also required in that there is a God in Heaven that revealed through dreams and visions.

Daniel 2:28 "But there is a God in heaven who reveals mysteries, and He has let King Nebuchadnezzar know what will happen in the last days. Your dream and the visions [that came into] your mind [as you lay] in bed were these:"

Unbelievers think traditional thoughts rather than spiritual thoughts. All things we have come from Father and for those who reject the truth of these visions, also reject the cornerstone that the foundation of the truth is laid upon. The visions from Father are a reflection from the sea of glass and is also why glass is symbolic in receiving messages upon its reflective surface.

Revelation 4:6 "Also before the throne was something like a sea of glass, similar to crystal. In the middle and around the throne were four living creatures covered with eyes in front and in back."

How glass is defined in Father’s Word describes the reflection of His own glory that shines upon those who will win victory over the beast and its image.

Revelation 15:2 "I also saw something like a sea of glass mixed with fire, and those who had won the victory from the beast, his image, and the number of his name, were standing on the sea of glass with harps from God."

Exodus 16:10 "As Aaron was speaking to the entire Israelite community, they turned toward the wilderness, and there, in a cloud, the LORD's glory appeared."

It was the reflection of Father's glory in a cloud.

Exodus 24:16 "The glory of the LORD settled on Mount Sinai, and the cloud covered it for six days. On the seventh day He called to Moses from the cloud."

The reflection of Father's glory was made manifested through the use of the cloud that settled over that mountain. That was the purpose of using a cloud and the lightning was more manifested and better seen in the cloud than if it had not been there. The same holds true when shooting a reflective picture off of a glass pane or mirror. It is used to enhance the effect of bringing the message across. Father manifested His glory in a way that mortal eyes could see and comprehend the awesomeness of what He was relaying for all to see.

Exodus 24:17 "The appearance of the LORD's glory to the Israelites was like a consuming fire on the mountaintop."

Exodus 28:2 "Make holy garments for your brother Aaron, for glory and beauty."

We must all understand that for glory and beauty to be seen, there must be made use of a medium to bring it to our frail eyes, just like the garments designed for Aaron; otherwise, the sight Yahweh desires seen is futile. The lilies of a field in all their beauty are but a reflection of Father's glorious flowers that exist in Heaven; but you could not comprehend the beauty if you had not first seen the reflection here. At present, we cannot look upon Father’s full and complete glory so it has to be done by reflection, as Father also did for Moses. As you read the following verse, consider that Father HAD to show only His back, because even with Father’s great power, Moses would have perished had he actually looked upon Father’s very essence in complete form, which was referred to as His face.

Exodus 33:21-23 " The LORD said, "Here is a place near Me. You are to stand on the rock, and when My glory passes by, I will put you in the crevice of the rock and cover you with My hand until I have passed by. Then I will take My hand away, and you will see My back, but My face will not be seen."

Father is far too powerful and majestic for anyone to look upon directly and actually see His face. And this, is why we see all through reflections – glass, water, mirrors, etc. – it is a safeguard and a convenient way to view what Father’s holy side wants to relay to each of us. Those who cannot accept how visions come across, will quite simply, remain in the dark.